A Bit About Georgian Wine

When wine lovers think about the great wine regions of the world, Georgia is not often mentioned - but it probably should be! Kakheti, a region in eastern Georgia, has been making wine for 8,000 years (the oldest known wine makers) and it is ingrained in the Georgian culture to this day. Every country home has grapevines covering the terrace that the family uses to make their own homemade wine. My friend told me that some families make as much as 2 tons of wine a year just for familial consumption and supras (celebratory feasts), where the tamada (toastmaster) can drink many liters of wine in one evening.


While some large winemakers have adopted European techniques, most still use the traditional kvevri, a large clay pot buried under the ground while the wine ferments.The use of these pots, and leaving the grape skins in for part of the process, means that white wines tend to be more orange in color and have a different flavor than wines aged in oak or steel. 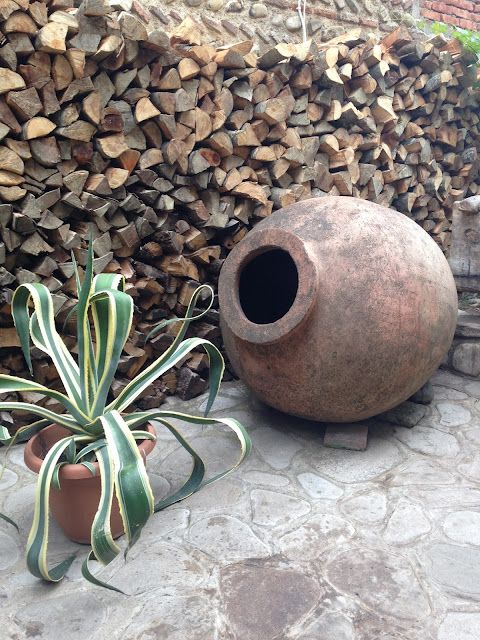 Aside from the technique, what makes Georgian wine so unique is that they are using grapes only found in the Caucasus - over 500 ancient varietals! They're not churning out another mediocre sauvignon blanc or cabernet, they're producing small batches of rkatsiteli, mtsvane, saperavi and so many others, each with their own flavor and style. Quality still varies widely (especially for the homemade stuff), but has improved dramatically in the last 10 years. One Georgian told me that Russian sanctions on importing Georgian wine were the best thing that could have happened to the Georgian wine industry - instead of producing bad, sweet wine to sell to Russians (their biggest market up til then), they had to learn to make wine that the rest of the world would enjoy drinking! If you're an oenophile looking for something new, Georgia should at the top of your list!

A Weekend in Wine Country

Now, I'm not exactly an oenophile but I do love a good glass of wine or two. So when Marketa, a Czech gal I met in Yerevan, mentioned she was going to visit a winery with her friend, I wasted no time in inviting myself along.

Our first stop was Schuchmann Winery, a lovely estate started by a German winemaker who uses a mix of Georgian and European techniques (clay pots and steel barrels). We got a brief tour and tasting and then settled in the grass in the yard with a bottle while we watched the sun set behind the mountains. Schuchmann has a hotel at the winery, so you can drink all you want without having to drive anywhere! We moved to the restaurant where we found it hard to resist a few more bottles of wine with dinner - they were only $6 a piece! Thankfully, they offer a heavy breakfast with lots of juices and mineral waters for rehydrating the next morning.


Next we traveled to Sighnaghi, an old fortress town with a dramatic hilltop setting and a slightly Italian feel. I spent two nights here, climbing up and down all over town (and eating nachos at what might be Georgia's only Mexican restaurant, Pancho Villas - started by a Georgian who lived in California for some years). 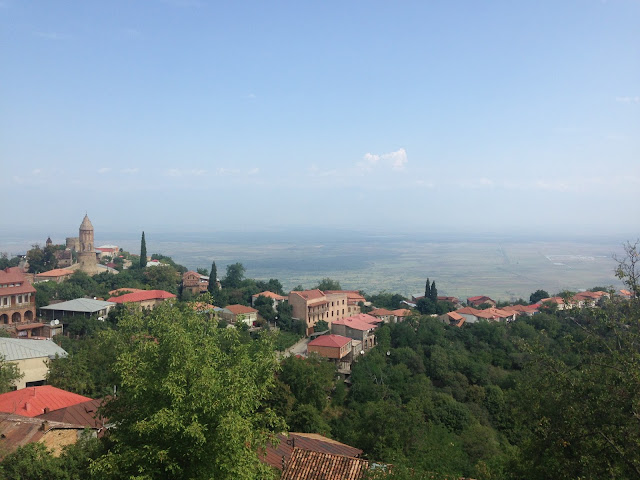 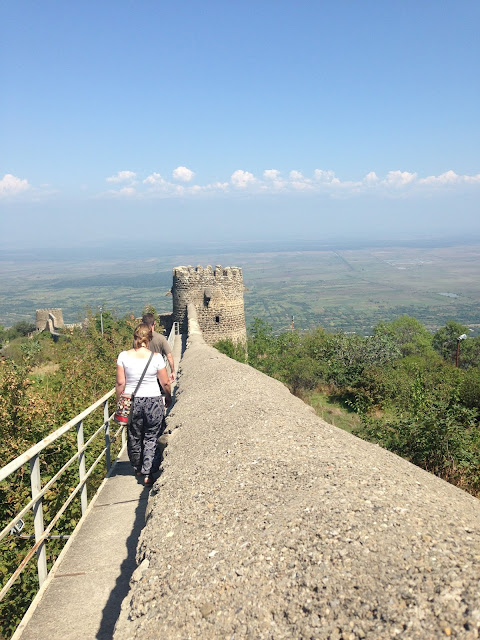 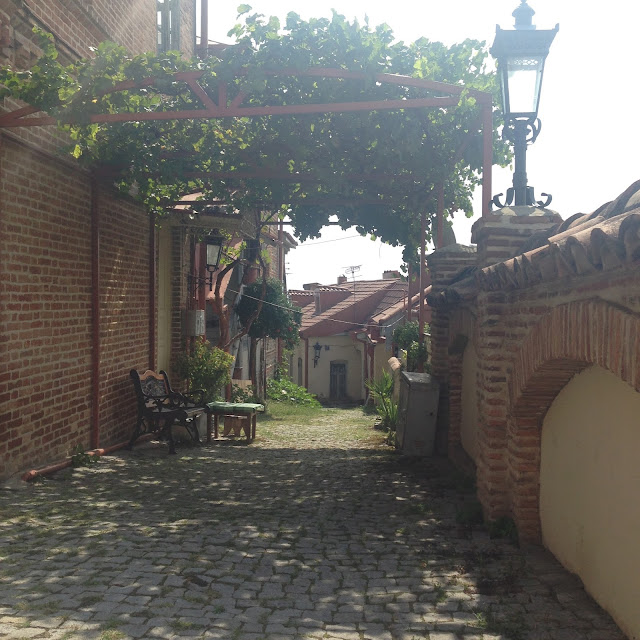 On my second evening, having recovered from Schuchmann, I stopped into the tasting room at Pheasants Tears. At 15 lari for a tasting, this was clearly kind of a fancy place. They produce organic wines using only the kvevri technique, and the tasting included 4 wines and an explanation from the chef of the restaurant. The mother of Georgian wine, Saperavi, is often called black wine because the color is so intense. It's really delicious when well done, as it was here! The chef also threw in a shot of chacha, a grappa-like liquor made from the leftovers of the winemaking process. It's very strong.

On the way home I stopped into another wine shop just to look, and the friendly owner offered me a taste of his own homemade wine that he's hoping to produce commercially. It's a very rare type of grape with a smoky flavor (I forget the name... I blame the chacha), and he currently sells his homemade batches for 100 lari a bottle! You can find his store on Erekele Meore St (right-hand side, if you're coming from downhill, sort of across from Natkhari restaurant). There are several tasting shops along that road!

What You Need to Know If You Go

It's best reached by private car, as it's in a small village without much public transportation. They can also arrange transport by private car from the Tbilisi airport, or you should be able to get there by taxi from Telavi.

The hotel is currently under construction, but it is quiet at night. The spaces are new and bright and quite lovely, and there will be a swimming pool on the lawn by next summer. It's a really beautiful estate. At the time we stayed, it was ~$60 for a double room including breakfast and the tour.

Buy your wine from the front desk - while prices for wine at the restaurant were still very reasonable (many bottles for about 12 lari), they started at 7 lari (that's about US$3) if you buy them straight from the cellar. They also have a wine bar in Old Town Tbilisi if you can't make it to Sighnaghi.

Sighnaghi is easily reached by public transport, with several marshutka (minibuses) each day to/from Tbilisi, as well as other nearby towns. There are a number of guesthouses and hotels in the area. I stayed at Nana's Guesthouse -  it's centrally located and Nana was very friendly and spoke good English, but I cannot particularly recommend it as the shared bathroom was rather in rather sad shape.

Restaurant options almost all offer the same typical Georgian menu - shashlik, khachapuri, etc. Pancho Villas has a lovely view and is nice if you need a break from the norm. I didn't eat at Pheasant's Tears, but the chef creates a menu every day based on what's in season - I wish I'd given it a taste!