Standing in the dungeon at Cape Coast Castle, the guide explained how the floors used to be brick. What we were standing on was hundreds of years of human excrement, periodically covered up with sand and eventually packed down until it was a solid surface. Men and women were brought on a forced march from the interior of West Africa to the forts along the coast. They languished, shackled to each other in these dark, damp dungeons for weeks or months, 1,000 men in space barely big enough for a few hundred, with a shared bucket for a bathroom. They could hear the sounds of the Europeans (Dutch, Portuguese, British, Swedish, depending on the time/place) going about their daily lives in the castle above them. The governor's bedroom at Cape Coast was two floors up from the dungeon, with nearly as much space for him as for all of them. 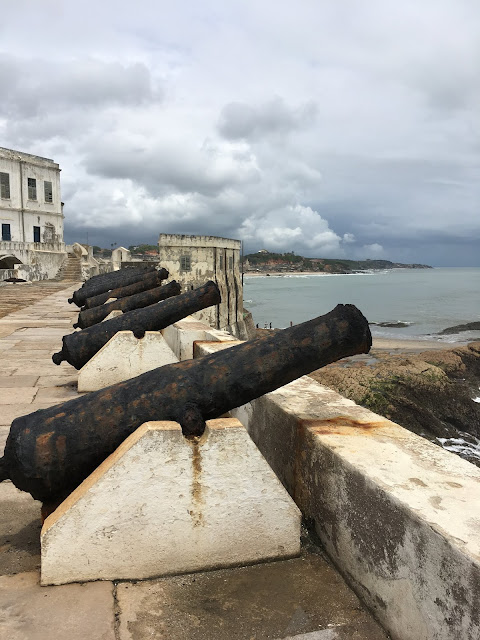 Those that survived were eventually marched through a tunnel to the door of no return, which led them straight to the boats that would put them on the ships that would carry them across the Atlantic, mostly to Brazil and the Caribbean. More would die along the way, and those who survived were condemned to a life of slavery, producing the sugar and cotton that Europe demanded. 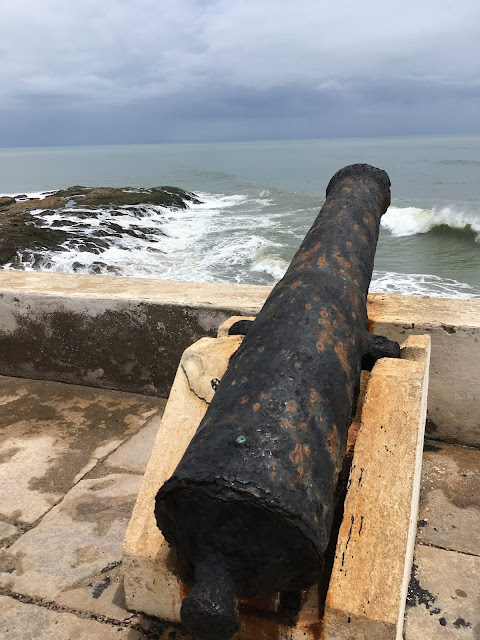 Ghana's relationship to slavery is complicated. Many Ghanaians (Gold Coast at the time) were among the 12-26 million Africans who were enslaved. But many Ghanaians were also active participants in or indirect beneficiaries of the slave trade - running raids into the interior to capture people and selling them to the traders, renting out tribal land for the forts, working in the castles and as slave masters down in the dungeons. It's easy to pass judgement; harder to remember that for a chief, aligning oneself with the colonizers was a way of protecting your people; for a father, working at the castle was a way to get your children educated at the European schools. And of course slavery and capture of enemies was not new, but the arrival of Europeans increased the scale of it dramatically.

Although it's fiction, the book Homegoing by Yaa Gyasi really gave me a deeper understanding of the nuances of slavery in West Africa and beyond - it's a brilliant book, read it!

For me, the visit to the castle was a reminder that we are all capable of dehumanizing others when it is to our benefit. It took FOUR HUNDRED YEARS for people to decide - hey, maybe this slavery thing is wrong and we should stop it even though we might lose some money because we'll have to actually pay people for their labor. For 400 years, people were able to morally and legally justify the enslavement of other human beings. Often, they were working to "save their souls" by converting them to Christianity at the same time that they were starving them in dungeons before loading them on ships to be taken thousands of miles from their homelands and sold to the highest bidder.


At least we learned our lesson, right? Maybe not. When I visited the Civil Rights Museum in Cincinnati a couple of years ago, I was surprised to see a display on modern day slavery, which included a section on Ghana. Trafficked children and women provide forced labour in hazardous conditions, particularly for illegal mining, fishing, domestic servitude, cocoa farming, and sex work. Ghana is not alone - it's estimated that there are more than 40 million slaves around the world today, and that the profits from the slave trade are more than $150 billion annually.

We can look back and see the horrors of the slave trade of the 1400-1800s, but we largely ignore the slavery and exploitation that exists today. We buy products without thinking about where they come from and who suffered to produce them. Everything from chocolate to electronics to clothing is touched by slavery.

My visit to Cape Coast and my subsequent research - along with the frequent use of dehumanization in our media and politics these days to justify racist and xenophobic policies - left me feeling pretty hopeless. So I researched some ways that we can help to end modern slavery:

Okay, that was nice and depressing. Want to go be depressed yourself? (but really you should - it's an important part of world history) Here's the how-to for a trip from Accra to Cape Coast/Elmina.

From Kaneshie Station I got a "fast car" (which was really a nice tro tro) to Cape Coast for 18 cedi in about 3 hours. It dropped off along the main road in Cape Coast and I got a taxi to the castle, but I could have walked. I took a private taxi from Cape Coast to Stumble Inn (past Elmina) for 50 cedi, which took around 30 minutes.

Coming back, a taxi from Stumble Inn to Elmina was 20 cedi and a shared taxi from Elmina to Cape Coast was 3.50. The shared taxi dropped me right at the Ford station, which is a 15-passenger van that only had 14 passengers! For 24 cedi I got air conditioning and a seat belt and was back at Kaneshie Station in just 2 hours - definitely worth the extra 6 cedi! Be sure to look for the vans and not the mini-buses at Kaneshie if you want the slightly more luxurious experience on the way there too.

Both ways I got lucky and arrived to nearly-full vans that left within 10-20 minutes.

The Forts/Slave Castles
Cape Coast Castle - in Cape Coast, naturally - has a 40 cedi entrance fee which includes access to the museum and a guided tour that lasts around an hour. Our tour guide was very knowledgable and really brought the experience to life. It was very moving. Cape Coast was run by the British.

St George/Elmina Castle in Elmina - I opted not to visit a second castle as I've heard the tours are rather similar, but some people like to get both experiences. Also 40 cedi with a tour included. I've heard the hawkers outside Elmina castle are much more aggressive, so be prepared. Elmina was a Portuguese fort.

Accommodation:
I originally planned to stay at Coconut Grove Bridge House, which is very close to Elmina Castle (rooms start around $60). At the last minute, I decided to instead stay at the Stumble Inn, about a 15-minute taxi ride west of Elmina. It's an eco-lodge and definitely is not fancy. I paid 90 cedi ($18) for a private hut with en suite bathroom (latrine and cold-water outdoor shower). t's right on the ocean, but there is no beach - I think if you walked down a few hundred meters you might find some sand, but in front of the Inn it's just rocks. Stumble Inn is rustic and imperfect, but it was super relaxing, the staff were great, the food was decent, and it's a really good budget option in an area with mostly fancy resorts.

Some tips to make your stay more comfortable: Bring your own soap, towel, and a sarong to use as a top sheet. The whole place is solar powered and there are lights but no outlets in the room - you can charge your phone at the bar but only when the sun is out, so be sure to charge up before nightfall! No wifi but there is good cell signal. 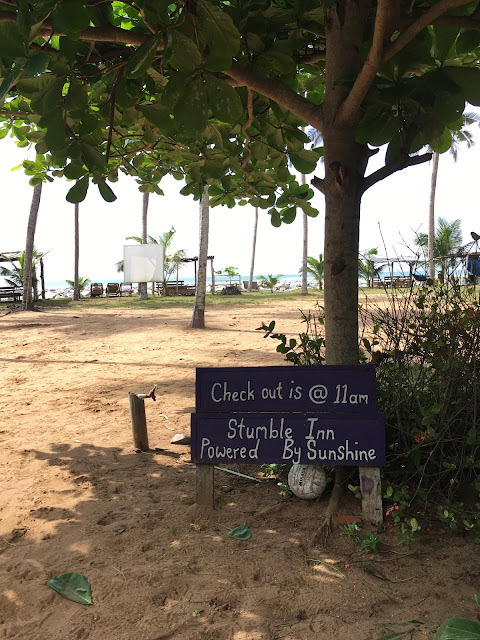 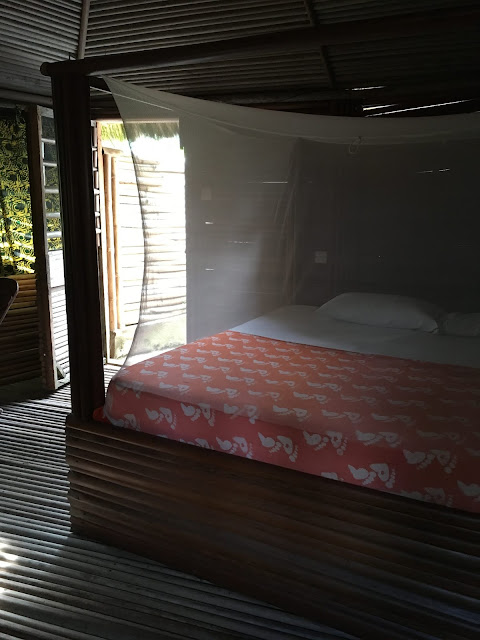 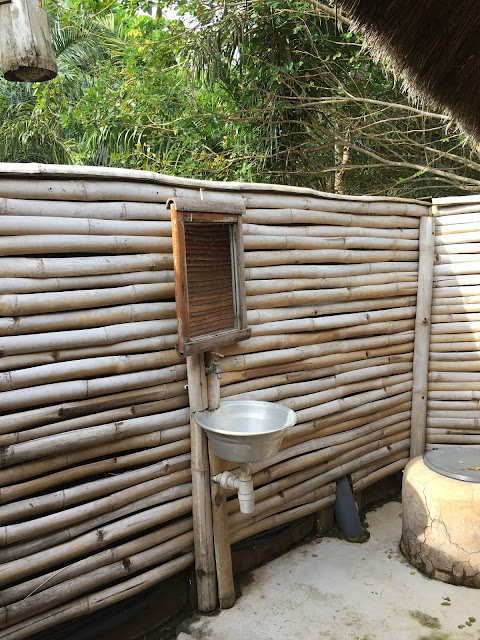