Sometimes when you're traveling, everything seems to fall into place - the sun shines, or at least you get a rainbow. The bus shows up on time, you meet lovely people, you eat delicious food, you happen upon fun things to do, you find joy in every moment. And then, sometimes, every little thing seems harder than it should be and it makes you want to scream, or cry, or some ugly combination thereof.

After a pretty easy first week and a half in Turkey, we had a 36-hour streak of bad travel luck that left me wondering if I was going to be able to last another 2 weeks in country on my own. Nothing major happened, no one got injured or assaulted or lost a bunch of money - but by the end of it we just felt beaten down. I thought about skipping over this bad day on the blog, because it's way more fun to reminisce about the good days, and honestly I had all but forgotten this day already. But I also don't want people to think that every day is rosy on the road. Annoying stuff happens, patience wears thin, and some days I was just barely holding it together. However, the good days far exceeded the bad, and ultimately the bad days made the good ones feel like that much more of an accomplishment. I didn't get ripped off by a taxi driver today? Today was the BEST! (Seriously, why do all my bad travel days involve taxis??)

So here, to keep things honest, is one 36-hour period that was (in retrospect) almost comically full of annoyances and hiccups.

After a lovely stay in Kas, we hopped a mini-bus to the seaside city of Antalya where we would spend a night before catching an early flight back to Istanbul. We only had to wait 10 minutes at the station before a dolmus hit the road - hurrah! But we clearly left our travel luck behind in Kas, starting with some motion sickness as we wound up and down the hilly coastline.

Arriving in Antalya we got let off on a corner by a taxi stand. We were only 15 minutes from our hotel, but all the taxis were quoting us absurdly high prices. We could have walked, but loaded down with luggage, exhausted and still felling kind of queasy, we had little choice but to pay what they asked. After barely a 10 minute trip, our driver pulled over and started pulling our bags out of the trunk. What's going on? We were clearly not at our hotel - just at some random spot on the boardwalk. He tried to tell us that he couldn't get to our hotel because the road was blocked, but it would just be a 100m walk down the pedestrian path. We had a phone with GPS telling us clearly it was more like 450m, but he was already back in the car and on his way. As we walked, we realized we had to pass some kind of political demonstration - given the previous day's bombing at a pro-Kurdish rally in Ankara, this made me really nervous and we tried to skirt by as quickly as possible.

Walking up to the hotel what did we see but a taxi dropping someone off - clearly the roads were not blocked, our driver just didn't want to go out of his way. We'd booked a highly-rated mid-range hotel online that promised many amenities including satellite TV - which turned out to be an 8" screen fit for a college dorm, and which we couldn't figure out how to plug in or connect to the satellite. Giving up on our plan of relaxing in the room and catching up on world news, we headed out to explore the neighborhood and find something to eat. We were clearly in a very touristy part of the city, and while the streets were lovely for wandering and buying expensive handicrafts, they were sorely lacking in reasonably priced restaurants.

Eventually we settled down to share a huge plate of meat, lavash and salad at a restaurant that looked like all the others. Our server was kind and we were surrounded by adorable street cats - seriously, they were all over - which gave us a nice reprieve, although at this point Isabel and I were both sort of cranky (and maybe also hangry?) and not much for conversation. We mostly looked at our phones until we dove wordlessly into the meat pile. We took our leftovers with us in a greasy napkin, confusing our waiter who kept trying to throw it away, and shared them with as many street cats as we could find - this was undoubtedly the highlight of our time in Antalya!

After a rough night's sleep due to a total lack of insulation in the hotel, we woke up absurdly early and got a taxi to the airport. The taxi was of course insanely expensive, and at this point I was starting to freak out a bit - I still had 2 1/2 weeks left in Turkey and it felt like I was hemorrhaging money (note to self: better to go to the expensive countries at the beginning of your trip, not the end).

Starbucks at the airport gave us a little (pricey) comfort, and our flight went smoothly, We took a shuttle from the airport to Taksim Square, and from there the hotel had told is it would be a 15 lira taxi ride - it was barely a mile away. We stopped several taxis who all wanted to charge us more than double that, so we decided to walk a bit down the road. Even at a taxi stand, however, we couldn't find a taxi driver! The empty cabs didn't know where we were going, or wanted 35 lira to take us there. Eventually we gave in and agreed to pay a driver 20, and got on our way. Our driver proceeded to stop not once but twice in less than a mile to ask for directions - in spite of the fact that he had Isabel's phone with the routing in his hand. Finally, he pulled over on the side of a busy road and told us to walk from there because he didn't want to go all the way down to where he could make a left turn across the tram tracks. We refused to pay him the full amount because he didn't take us to our door - we gave him 15 and walked away as fast as we could, while he was arguing with us and trying to pull in passersby. It was a decision made out of pure stubbornness and was probably not the smartest one - he could have been more dogged in his pursuit of the last 5 lira - but we were pretty fed up at this point.

After getting settled into our apartment, we headed to the Grand Bazaar in an attempt to salvage the day. We hadn't had any doner kebab since arriving in Turkey, so when we saw all the shops lining the bazaar we knew that would be our lunch. As we were waiting for our food, I watched two girls with limited English trying to argue with the waiter about their bill, while he responded condescendingly - this should have been a sign, but I was too tired to think much of it. We ate our kebab - which was fine, but nothing spectacular - drank our Cokes and asked for our bill. Suddenly it became clear what the girls had been arguing over - there was a 35% "table fee" on the bill, which was written in small print at the bottom of the menu in Turkish. So our 20-minute kebab stop cost us $30! We'd expected hiked up tourist prices near the bazaar, but this was ridiculous. (For reference: the following week I found a perfectly tasty doner kebab shop in Galata where I paid around 10 lira - $3.50 - for my meal)

The Grand Bazaar was actually not as intense as I had feared - certainly nothing compared to the Tehran bazaar! - but I hate being ripped off and was still steaming from lunch, so I was in no mood for overpriced goods and assertive touts. Anyone who attempted to talk to me got a pretty serious glare, so we just made a cursory loop before heading back to our happy place - Hasan's carpet shop.

Just when we thought our attitudes were shifting - another "table fee" tacked on to our dinner bill, which we were told covered bread, water and salt. I was feeling argumentative enough at this point that I wanted to ask for the salt portion of that back, since we hadn't used any - but I managed to refrain. The glass of wine I'd had with dinner must have mellowed me out a bit.

According to my journal we "walked home in pouring rain, but that wasn't so bad" - ha! I guess the good thing about a bad day is that it makes some of the other stuff, like walking home in the rain, seem better? That slight shift in attitude was a sign of good things to come - the very next day would turn out to be pretty wonderfully epic.

How do you cope with bad days on the road?

For me, I crave comfort food - on a different day when I was getting sick and feeling lonely, I turned to a 'shroom burger and crinkle fries at Shake Shack to lift my spirits. 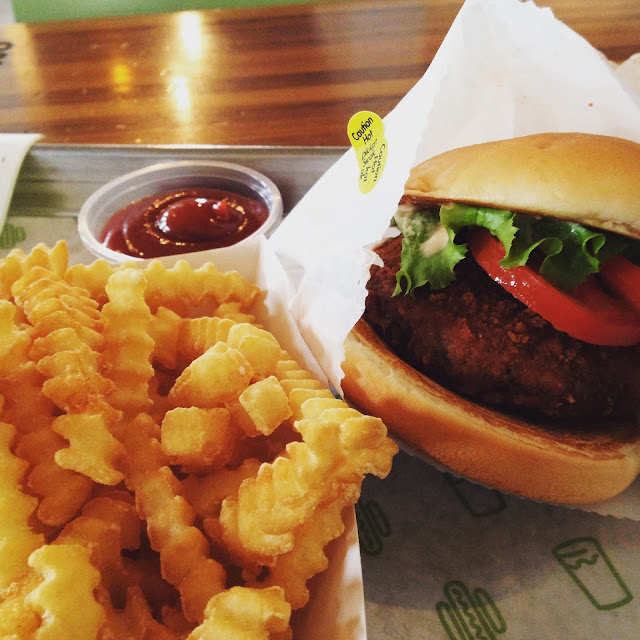