Hasan and the Turkish Carpets

Yes, I know I told you all about Persian carpets and how they're special - and Judith (my partner-in-crime in Iran) and I tried to buy them in Iran, we really did. We spent hours in several carpet shops admiring the handiwork, only to learn that they were out of our budget. Like way, way out of our budget. Like, the carpet I loved that was the size of a large bath mat? It cost $2500. No amount of negotiating was going to make that happen, so we both gave up on the idea of going home with a Persian carpet.

Turkish carpets may not be as famous as Persian, but they're still quite beautiful. Wandering the bazaar by the Blue Mosque one afternoon, Isabel, Judith and I stopped to admire a woven pillow case outside a carpet shop. The owner came out and offered to show Judith more pillows like it, and before we knew it we were all seated inside his tiny shop with an array of colorful pillowcases fanned out on the floor. But Judith wasn't really in the market for pillows - so out came the carpets. 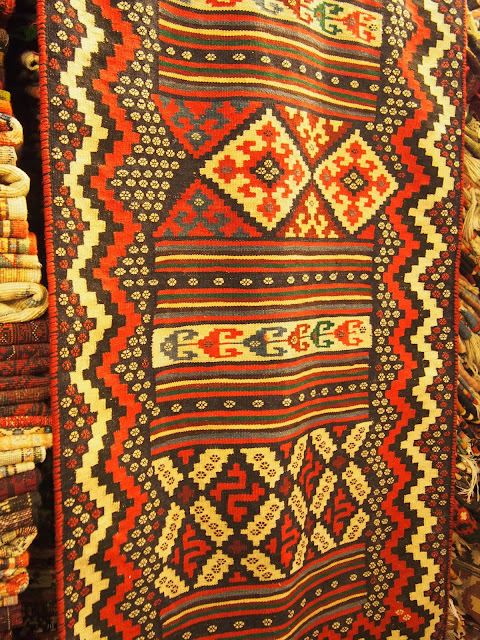 Hasan, the owner, has been selling carpets in the bazaar for decades. He's sassy and smart - he started off by asking us our nationalities, and then guessed how we would shop based on that... and he wasn't far off. Americans, he says, know what they want when they see it, and they're willing to pay a fair price for it. Sure enough, when he showed me a gorgeous red, purple and green hand-woven silk suzani covered in pomegranates and flowers, I knew I wanted it - and I knew it was a little more than I wanted to spend. I tried to talk myself out of it, and so looked at the cotton suzanis which are a bit cheaper. Of course, then I found another one I wanted, with cool, rich blues and greens. As I wavered over which one to get, Hasan offered me a deal - both of them for $50 more than the price of one. "Done," I said, and handed over my credit card. We'd been in the shop less than 10 minutes.

Judith, who is Dutch, took her time - also as Hasan had predicted (they cannot decide what they want, he says). After the floor was covered in carpets and prices had been discussed, she sat back and looked. and waited. and debated. Hasan knew when to back off. He had someone bring us apple tea and we all chatted and relaxed. When the second cup of tea had been taken away, he offered Judith a price she was happy with and she finally had her carpet! A beautiful, yellow, vintage carpet from Uzbekistan (for a fraction of the price of a Persian carpet).


But we weren't done with Hasan yet. Isabel was biding her time. She'd seem something she liked, she told him, but she wasn't ready to commit - and she wasn't going to tell him what she wanted. We made a promise to come back at the end of our trip, on the 13th, to pick up my suzanis and take a second look.

When we arrived back in Istanbul, we went straight to see Hasan - we couldn't help ourselves. We walked in and he said "how can I help you?" and we said "Do you not remember us?" He replied "of course, but I was expecting you on the 13th. It's only the 12th!" He started to laugh and quickly finished up with his other customers while he ordered our apple tea. We spent another hour in his shop - chatting, looking at carpets and pillow cases and suzani, drinking tea, listening to stories from his decades of carpet selling. Isabel got exactly what she wanted (and I got some pillowcases I didn't know I wanted til I saw them...), and we left with big hugs from Hasan telling us to come and visit the next time we're in Istanbul. And you know what? We will. 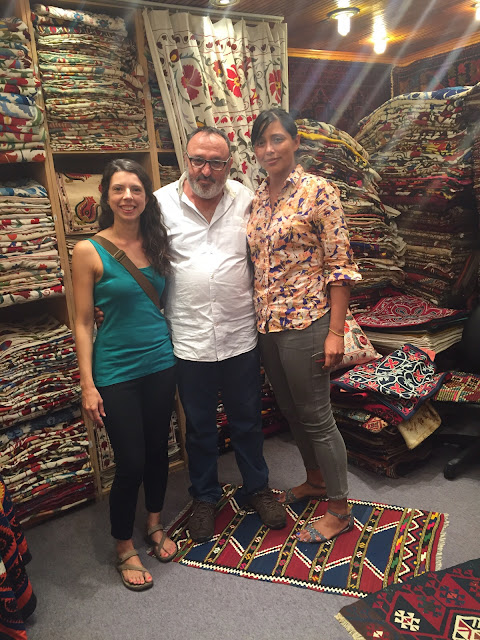