Mexico City, often now referred to as CDMX (Ciudad de Mexico) is a feast for all the senses, but most especially the sense of taste. Once considered a dangerous and crowded place that no traveler spent more time in than was necessary, the city formerly known as the Distrito Federal has now become a darling of the travel blogging scene - and given how easy it is to get there from the US, it was about time I checked it out for myself.

Arriving from Oaxaca, I met my friends at our AirBnb in the popular neighborhood of La Condesa. The tree-lined streets and location right above a chocolate shop were idyllic, but just a block away the street was closed in front of a building that was missing the front half. Just a month or so before our trip, Mexico City was shaken by an earthquake and La Condesa and neighboring La Roma took the brunt of the damage and several dozen people lost their lives. Walking along you would suddenly see a pile of rubble, often in between two buildings that looked unscathed, and frequently a memorial along with a sign requesting that photos not be taken out of respect for those who lost their lives. Que descansen en paz.

The city was mostly back to normal speed, and we spent a lovely and surprisingly tranquil Thanksgiving week in the 10th largest city in the world. Much like Oaxaca, I continued my trend of being a terrible tourist - we went to two museum (Anthropology - which was great! and La Casa Azul), and spent a couple hours in the Centro exploring the area between the Palacio de Bellas Artes and the Zocalo. But, if you've met me, you know the main reason I was there was to eat! 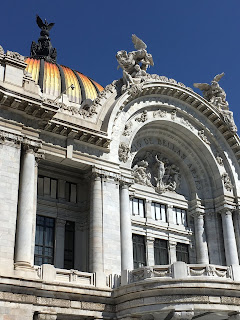 La Comida de CDMX
Mexico City has a huge variety of cuisines, but with only 3.5 days in the city, we wanted to eat our fill of Mexican food. You can find a million lists on the internet of the best places to eat in CDMX, but honestly stop into anything that looks cute on your walk and you'll probably be fine. A few of my favorites:

El Turix: in the heart of the fancy neighborhood of Polanco sits this unassuming taco shop. They specialize in cochinita pibil and it comes in a few varieties - tacos, tortas, and some other words I didn't recognize. The mode of transport into your mouth doesn't really matter - the pork is messy and divine and better than anything we paid three times as much for.

Restaurante Nicos: we celebrated Thanksgiving at this old school formal restaurant in La Claveria. We knew our lunch would be great when they started by rolling over an entire cart of mezcal. Salud! It was the kind of meal you linger over for hours.

Lalo: a great breakfast spot in La Roma with delicious baked goods that are impossible to resist when the waiter brings the tray down the communal table, and excellent chilaquiles.

Panaderia La Rosetta: there will probably be a line, but don't let that stop you. The bollos de romero (rosemary buns) alone are worth the wait.

Que Seria de Mi: this neighborhood breakfast spot did not show up in any of my research, but we stumbled across it on our last morning in town and were so glad! It's a tiny spot and we waited outside for maybe 10 minutes with a Canadian couple who were eating there for the third time on their trip.


Kid Friendly Mexico City!
Traveling with a young child can be tough - new foods, transportation, different routines. But Mexico City is surprisingly kid friendly and was a great place for my friends from Texas to meet me with their adorable 2 1/2 year old. In spite of some eating challenges (the kid who loves Tex-Mex would not touch real Mexican food), the trip in general was very smooth. There are lots of kid-friendly activities, kids are welcome in restaurants, and Uber drivers did not seem to mind that P left a trail of crackers in the back seat - they were too charmed by him calling out colors of passing cars in Spanish. All in all, a great place to test out international travel with your young one!
Labels: Food Kids Mexico