Okay, I'm admittedly sort of regretting this 5-part Iran Highlights series now that it's mid-December and I'm still writing about a trip in September! But I've saved some of the best for last - the people of Iran.

Most of the time when doing research on a destination, you read a lot about how great the people are. Mostly what this says to me is that throughout the world, there are lots of good and kind folks (or, if I'm being cynical, that we are really not accustomed to hospitality and kindness towards strangers in our Western culture). I've been to 29 countries and 39 states, and I've met some wonderful people in almost all of them So while Iranian hospitality is legendary, I kind of assumed it was like the stories you hear of all these other places. I was wrong, y'all. Iranians take hospitality to a whole new level, one that's sort of incomprehensible to me still. These are just a few of the stories of people who made impressions on me during my two week trip.


A warm welcome in Tehran

I arrived in Tehran a day before my tour started, to give myself a cushion in case anything happened. I wasn't sure if I was even allowed to leave the hotel without a guide, so I was sort of planning on a lazy first day in the hotel. That changed quickly when a fellow tour member, Amanda, came knocking on my door and easily convinced me to join her for a walk. We put on our scarves and headed out to explore our neighborhood. Maybe 10 minutes into our walk, as we chatted about this and that, a woman walking in front of us stopped and turned around. "I'm so excited to hear English being spoken!" she said. Turns out, she had spent a year studying in the US during university. She had lots of questions about why we were there and how we liked it, and then she invited us to her home! She needed to check in with her husband, she said, but she'd love to have us over for lunch or dinner sometime before we left Iran. This stranger, who we'd randomly come across on the street, was asking us into her home! She gave us her contact information and told us to contact her if our schedule allowed (one of my great regrets of the trip is that we never had enough downtime in Tehran to be able to meet up with her).

After she left, Amanda and I turned to each other in amazement - was this for real? 10 minutes in Iran and we're being invited into someone's home for dinner? We couldn't stop smiling and wondering about this place that seems so closed to outsiders, and yet was already welcoming us with open arms.

Later on that same walk, we bought a juice. We'd just been to change money so we only had large bills - and in Iranian money, large means REALLY large. Like, a million rial bill. So when we paid for two juices (40,000 rials) with a 500,000 rial bill, we half expected the guy to balk and turn us away. Instead, he went to every business on the block until he found someone who could make change. Talk about customer service.

The people of Kerman proved equally friendly. One night several of us went out in search of a light dinner. We wandered looking for a fruit stand but couldn't find anything, so the one Farsi speaker with us asked a young man for directions. He didn't just direct us - he walked us there! On the way, we learned that he spoke very good English and was studying political science at the local university. The young man walked with us for a good 10 minutes before we arrived at the fruit stand, and then stayed to make sure we could buy what we needed!

Along our walk, I noticed a beautiful young woman with striking blue eyes peeking shyly at me from behind her hijab. I said "salaam, hello" and smiled - and she grinned back and introduced herself. She was from Afghanistan, living in Iran to attend high school, and spoke a little English so we chatted as best we could. She turned right and our young, impromptu guide took us left, so we parted with a wave and a smile.

After he left us, we stopped in an ice cream shop for a fresh juice. As we struggled to figure out which fruits were available for juicing (harder than you might think, when you only know 5 words of Farsi and one of them was a fruit wrongly translated in your phrase book), a woman sitting at a nearby table came over and offered to help. She translated our order, and went back to her family - but before they left, she came back to our table with a piece of paper with her phone number, and invited us to her house for dinner! She also told us that if we needed anything at all while we were in Kerman, we should contact her. After a 3-minute interaction in an ice cream shop!

These cutie pies were playing by the fountain outside the Raien citadel. They were slightly wary at first, but soon they were giggling as we tried to find a common language. We shared names and "hello, how are you"s and then I took a few photos and showed them to them before the ultimate in bonding - taking a selfie together! 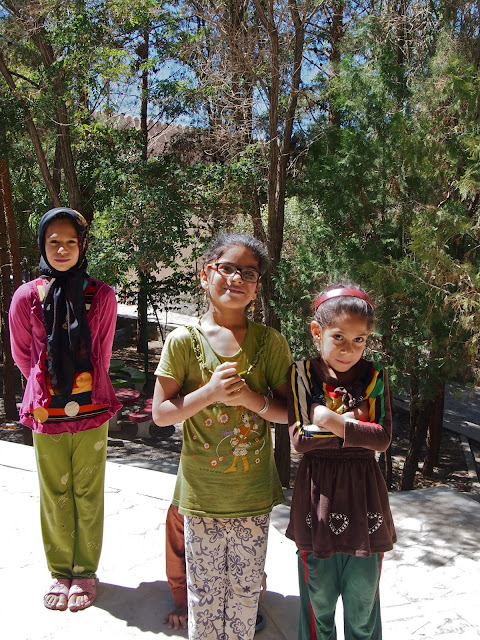 The Sun and the Moon

Not to play favorites, because all the people I met in Iran were lovely, but there are two who stood out above the rest. In Shiraz one night, Judith and I went out in search of pomegranate juice (yes, this is how we spent most of our evenings). As we ordered ab anar,  a young man approached us - he had heard us speaking English, and very politely requested that we walk a bit with him and his girlfriend so that they could practice their English. They were so cute we couldn't turn them down, so we walked and chatted, and wound up spending a good half hour getting to know them. They were university students, applying to graduate engineering programs abroad. They were incredibly earnest and adorably in love (he told us that they were perfectly matched because his name meant sun and hers meant daughter of the moon). The young man earnestly asked us to grade his English - we gave him a 7.25/9 (apparently the scale that Iranians use) and then made him a very official looking certificate with our signatures and "qualifications" (me: American; Judith: Dutch) on a piece of scrap paper for him to show to his English professor. And then, of course, we took a selfie (and he told me I needed to get the iPhone 6 because my camera is bad. I know, kid, I know.)

Something about these two just felt like the embodiment of the future of Iran to me - well-educated, still traditional in some ways but bucking parental expectations in other ways, with a great thirst for knowledge of the world and an incredible innate kindness and sincerity. Our selfie, even with my bad camera, is one of my favorite photos of the trip! (I'm choosing not to post it here so as not to get the young loves in trouble - her parents are conservative and haven't really warmed to him yet!) 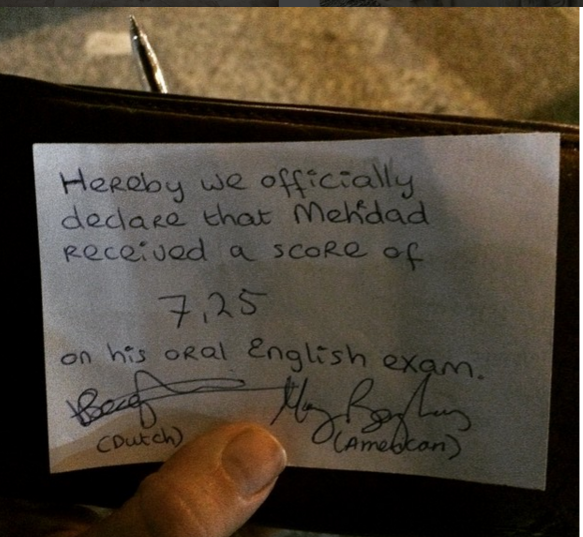