We'd been in the shared taxi together for 4 hours, but we hadn't spoken other than to exchange "good afternoon" when we got in. As the car approached the border with Togo, there were only 2 of us left, and my driver turned to ask where I was going. "Lome," I told him. "So is she," he said of the other woman in the back seat. He then turned around and told her sternly to take care of me and make sure I got across the border okay.

They both helped me change some money, and then my new friend and I started the process of leaving one country and entering another. She stayed with me as we walked back and forth between buildings, making sure no one gave me a hard time. We left Ghana and passed through Togo's health inspection, where I paid a small fine for her because she didn't have a yellow fever card ("you shouldn't have paid them," she said. "I just stand there until they get tired of me and tell me to go.")

At Togo immigration, the agent gave me a hard time about not having gotten a visa ahead of time (which is totally not required), and she gently chided him in French.  Meanwhile, she was being asked for payment by another agent - turns out, she doesn't have a passport. Once I had my visa, they let us leave - she tells me outside that she paid the guy 10 cedi, so as not to keep me waiting. Normally she would have sat there as long as it took for them to give up.

She lives in Ghana and her husband lives in Togo, and she travels back and forth regularly without any sort of documentation beyond her Ghanaian national service ID. "Yeah, I should probably get a passport," she says, but it doesn't sound like she will. Walking through with me cost her money, and she easily could have said "you go ahead" at any time, but she took her responsibility to look out for me seriously.

My friend even stayed with me once we were through. She offered to call her husband for a ride, but he was going to be a few hours. So she helped me find a real taxi (Lome exists mostly on motorcycle taxis known as zemidjans) and rode with me to the guesthouse so she could translate for the driver. Then she waved me off and went on her way home.


Benin-Togo
I sat down on the bench in front of the Benin border agent and handed him my passport and the printout of my e-visa. He painstakingly filled in my information on a paper form that was clearly not intended for this purpose (he had to make his own columns). As he went, he asked me questions about my trip, and suggested that I be his personal English tutor (I politely declined). He started flipping through the pages and stopped - where is my entry stamp for Benin?

The answer: I didn't have one. When I'd crossed into Benin the day before, I'd given my passport to no less than 3 border agents. They all looked at my visa, but no one stamped anything. I looked for another building to stop at on the way out, waiting for a guard to wave me down, but no one did. I asked my Beninois driver and he said no it's fine, you don't need a stamp. I was a little skeptical, but also tired and didn't feel like walking back. So we drove on.

Now it became clear that I did in fact need a stamp, and I did not have one. How was this man supposed to stamp me out if I had never entered? I was summoned to a small room nearby with three important-looking men in uniform. I sat next to the guy in charge and he asked me a question in French. "Je suis desolee, je ne parle pas francaise," I sweetly told him (this is mostly the extent of my French, and I used it a lot - it seemed to charm people.) "Parlez vous anglais?"

He did, thankfully as did the other officers, joking with me that I shouldn't say that I didn't speak French - "un petit peu - small small" I told them and they laughed. He asked me a few questions about my occupation, where I was going, and I explained how I had interacted with several border agents without getting a stamp the day before. Perhaps it was a misunderstanding, I said, since I don't speak French. He told the agent to stamp me out, and wished me a good journey.

As I left, one of the other officers asked in French why I was traveling alone. Then in English he said "do you have a husband?" I can scarcely get through a taxi ride without this question, so I should have known I wouldn't get through the border without it. Mentally, I'm trying to figure out quickly how to balance my answer. If I respond poorly to their flirtation, will I be allowed to leave the country? If I respond positively to their flirtation, I might get what I need easier, but they also might then feel entitled to my body. And of course they see no problem in asking me this question. Power and patriarchy, man. Sigh.


Traveling from Ghana to Benin: the Logistics

It was hard to find info about this trip online, so I was pretty nervous going into it, but it turned out to be super easy. Here's what I did:

Accra-Aflao (border with Togo)
STC runs minibuses multiple times a day (no set time - they leave when they get there). If you go for a ticket and they say there's a queue, that means the next bus coming in is already full and you'll have to wait for the following one, which could be an hour or 3 (lesson learned the hard way).

Shared taxis also leave from Tudu (just tell anyone you're going to Aflao). It took 4 hours leaving due to traffic, 3 hours coming back. 45 cedi. Try to get the front seat!

Trotros are your cheapest and slowest option. They leave from Tudu and will take about 5 hours.

Lome
Once you cross through the border, you're in Lome! And also right on the beach :-) The zemidjan (mototaxi) is the most common form of transport, but they typically don't have extra helmets. So I prefer a regular car - just keep walking til you find one. 3000 cfa to get to Ablogame neighborhood on the west side of the city (probably paid way too much).

I stopped in Lome for a night because I couldn't leave work until noon on Friday and wasn't sure how long it would take to get to Benin and I'd rather not negotiate borders/taxis alone after dark. I stayed at Aux Mille Cactus, a lovely, clean guesthouse run by the delightful Virginia who speaks French and English. There is a restaurant/bar next door with good food, and the breakfasts are simple but delicious (croissants, baguette, fresh fruit, juice, coffee/tea). $35/nt for 1 person. Will definitely stay here again if I return to Lome.

Note: there are a few ATMs in Lome, but not many and they can be hard to find! Bring some cash to exchange. Cedi or Euro would definitely work, not sure about dollars.

Lome to Grand Popo, Benin
I lucked out and got a free ride from the guesthouse because they were headed to Cotonou. But you can get a shared taxi from the Grand Marche for 1000 cfa to the border, about 1 hour.

Cross the border and find a zemidjan or a taxi to Grand Popo, about 20 minutes.

Grand Popo, Benin
We stayed at Auberge du Grand Popo which is a grand old colonial house. It has a dilapidated charm, but the facilities are basic and leave a bit to be desired. $45/nt for a room with 2 beds and A/C.

I got sick in Grand Popo and left a day early, so I don't have much other exciting info to share :-( Have a drink at Lion Bar, a local reggae joint. All the Peace Corps volunteers love it. You can also camp there for cheap accommodations. Coco Beach also came recommended for a place to stay. La Boca del Rio served a nice dinner in a charming courtyard. 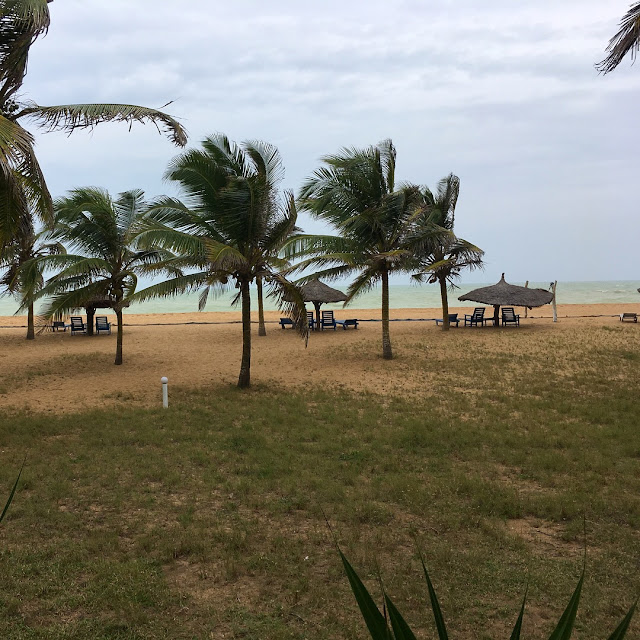 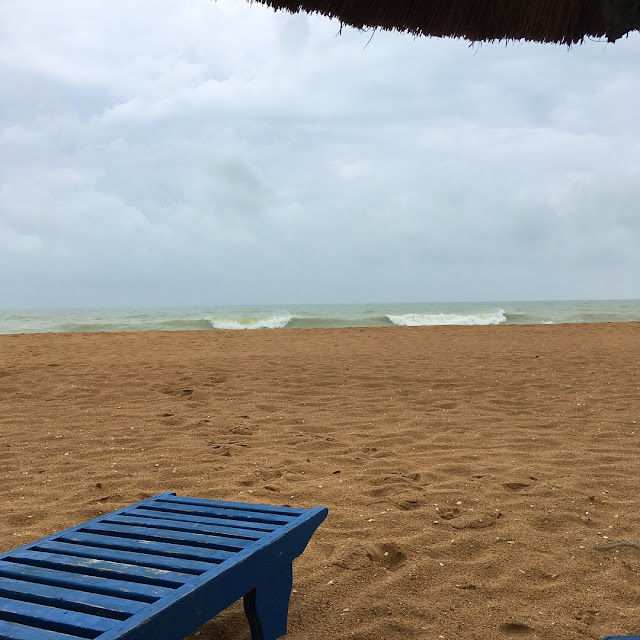 The return trip: Grand Popo to Accra in one day
It only took 6 hours!
Private car to the border (10,000 cfa - a rip off, but we didn't want to take a zemi)
Private taxi (I got tired of waiting for others) border to border: 7000 cfa
Shared taxi from Aflao to Accra: 45 cedi