By the time mid-October rolled around, I'd been moving more or less non-stop for 4 weeks. Initially, I'd thought to spend my last two and a half weeks exploring more of Turkey - Ephesus, Pamukkale, Bodrum, there's so much to see! But every time I started to do research and plan for that part of the trip, I just couldn't muster up any enthusiasm. I was tired.

And so, within hours of arriving in our cute little efficiency apartment for our second stay in Istanbul I found myself emailing the owner to see if he could give me a long-term discount. He made me a great offer, and I felt a huge wave of relief wash over me once I made the decision to just stay put in Istanbul until the end of my trip. It wasn't that I was tired of traveling, or ready to go home - but I was tired of being on the move. I needed to settle in for awhile, sleep in the same bed for more than a night or two, and find a little bit of a comfort zone again.

Luckily, I picked a great place to need a break. Istanbul is a city of 14 million, and every neighborhood has its own character and charms. Even with two and a half weeks I knew I wouldn't be able to see it all, and instead of trying to see everything I decided to mostly just stick to my neighborhood - Karaköy - and live like a local for a little while. And so I bring you my neighborhood guide to Karaköy!

Karaköy (also known as Galata), is located on the European side of Istanbul in the Beyoglu district. It's right on the water, across the bridge from Sultanahmet. It's what you might call a transitional neighborhood - mid-gentrification - and boasts an eclectic mix of tradesmen's shops and hip cafes and fancy restaurants. Although the neighborhood itself is interesting, it certainly is not the most exciting that Istanbul has to offer. However, accommodations tend to be cheaper and it's a great base for exploring other parts of Beyoglu - it's easy walking distance to the popular Istiklal street, Taksim Square, and the hip Cihangir neighborhood.

Istanbul Modern: I'm not usually a modern art fan, but this museum was colorful, interactive and entertaining. It was a great way to spend a rainy afternoon. 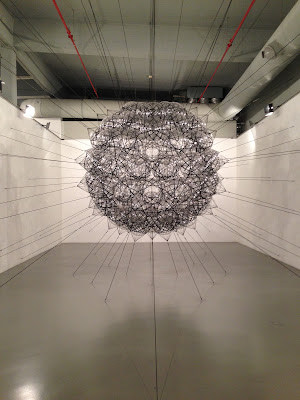 People watching: On nice days I would take a book and pick up some baklava and wander the few blocks from my apartment down to the Karakoy pier and grab a bench. Between the fishermen and the ferry passengers, there's some great people watching to be done. The streets near the Galata Tower also offer some good people watching, though sometimes it was overly crowded for me. 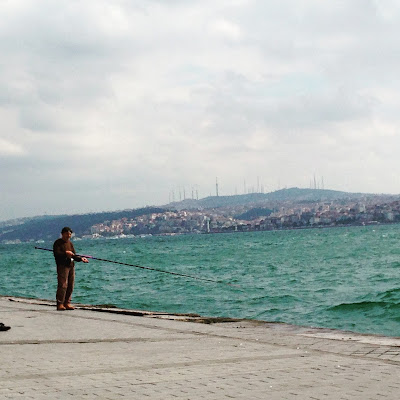 The Spice Bazaar: This one requires a walk across the Galata bridge, which is an activity in and of itself - watching all the fishermen reel in their catch. The spice bazaar had a totally different feel from the Grand Bazaar - much less chaotic and intense. There are many spice vendors, of course, but if you wind your way through the back alleys you'll also find kitchenware (super cheap copper mugs for ayran!), peshtamels, school supplies, and all sorts of other things.


Street Art: At first glance, Karakoy is still a pretty industrial neighborhood - hardware shops and cement buildings. But if you take a turn into the maze of alleyways that wind parallel to the main thoroughfares, you'll find yourself in a totally different world. Overgrown vines and bright graffiti line the walls next to hidden cafes and bars. 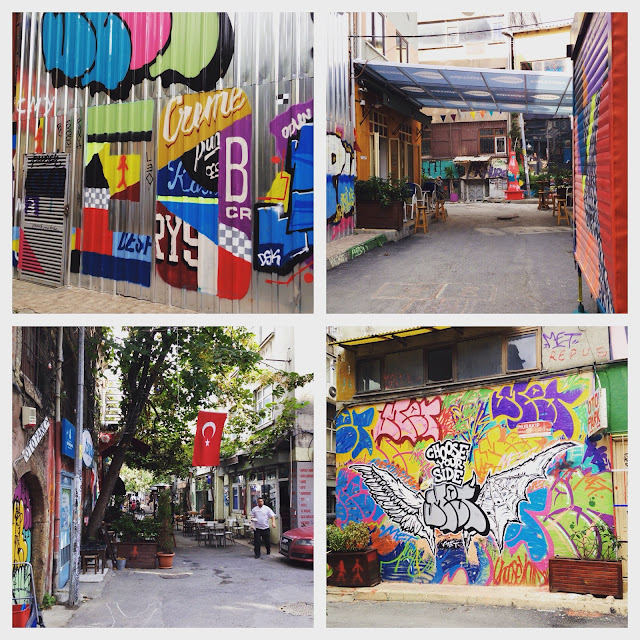 Cafe Sitting: Speaking of those hidden cafes - once I found them, what was I to do but sit and have a cup of cay? So much cay.

Hammam: I did not actually do this (I'd have enough of a bath house experience in Tbilisi to last for some time), but the Kilic Ali Pasa Hammam (near the Istanbul Modern) came highly recommended by several locals and travelers.

Shopping: The streets above Kemeralti cadessi  leading up to Istiklal and the Galata Tower are linked with small shops selling all the typical Turkish souvenirs - towels, ceramics, lamps. Those along Yuksek Kaldirim cadesesi tend to be a little more touristy and expensive, but you can find some reasonable prices. My preferred street, though, was Bogazkesen/Yeni Carsi, which had expensive but more unique art and craft stores, along with cafes and used bookstores. And lots of cats.

There is some very good eating to be done in and around Karakoy - everything from high-end to local cafeterias. I've listed a few of my favorites below. The Istanbul Eats: Exploring the Culinary Backstreets guide was a great resource (free with our tour) that steered a lot of my food adventures. I then used my maps.me app to pin all of the places I wanted to try while I had wifi so that I could pull up the map when I got hungry during my explorations and see what was nearby!

NATO Lokantasi: This unassuming cafeteria was just a block away from my apartment. Only open for weekday lunches, I walked by it twice before finally going in - the lunchtime crowd can be pretty intimidating! Finally I walked by one day at 11:45 it was nearly empty, so I dove in. Not much English was spoken, but I went to the back where the dishes were on display and pointed out what I wanted with some help from the chef. My favorite from multiple visits was a simple dish of white beans in a slightly spicy tomato sauce - so much more complex than it appeared.

Karaköy Gumruk: Recommended to me by the chef at Nicole, Karaköy Gumruk is a more upscale option. I treated myself on my second to last night - a hearty, earthy mushroom risotto for dinner and crispy phyllo dough filled with pastry cream and a raspberry sauce for dessert. 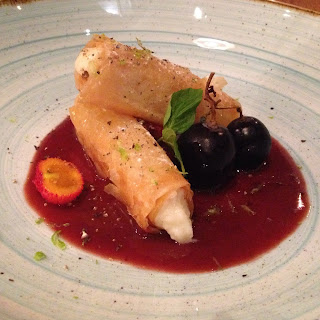 Namli Gurme: This market cum deli is a great way for a solo traveler to try out lots of Turkish dishes at once. A nice young guy at the deli counter greeted me in Turkish but quickly realized that I didn't understand and gave me a tentative "hello". Before I knew it, he had picked out small portions of a number of his favorite things for me to try and pointed me in the direction of the cashier. I also came here at least once a week to pick up cheeses and olives and other goodies for eating at the apartment.


Karaköy Güllüoğlu: Eat all the baklava. (The walnut is my favorite.) 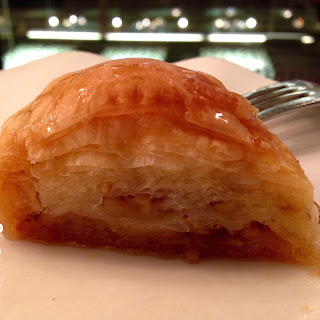 Turkish breakfast: Being Turkey, there are many places to find Turkish breakfast. A couple of my favorites were Van Kahvalti Evi, a popular Cihangir spot known for its kaymak (clotted cream) with honey (try to go on a weekday morning, or be prepared for a wait); 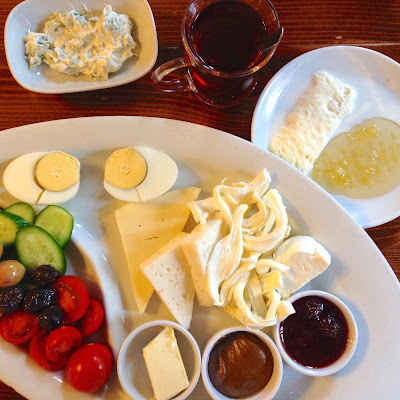 and even more delicious was Datli Maya, where the "Breakfast for One" could easily feed two - eggs, olives, vegetables, cheeses, and super good homemade simit and olive bread (I considered stuffing the leftovers in my purse). 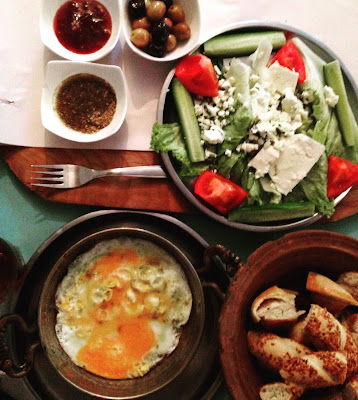 Ficcin: In the streets up above the Galata tower, this Turko-Caucasian restaurant has a unique take on the Turkish version of ravioli (manti). Theirs are larger and more pierogi-like, but still delightfully slathered in garlic yogurt and chili oil with an added punch from sumac and oregano sprinkled on top at the table. 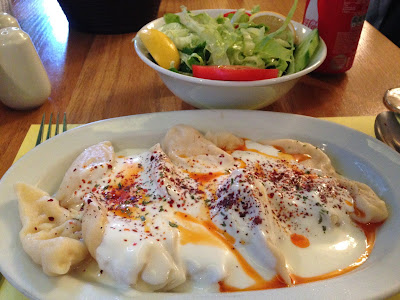 The Finch Apartments made a lovely home base for my 2.5 week stay. My small room had two single beds, a private bath and a mini-fridge, along with a kitchenette shared with the room next to me. There was also a larger communal kitchen upstairs where I cooked quite a bit. The owner, Onder, was really nice and very helpful (ask him to help arrange taxis to avoid getting ripped off). The one downside to the apartment is that it can be hard to meet people if you're traveling alone - though I also didn't try very hard. Rates seem to vary by booking site - if you'd like to contact Onder directly (finch@finchapart.com), he can probably give you the best price (also, he may give a cash discount).