Iran is full of really, really pretty things. So pretty that, after two weeks in Iran, I walked into the Blue Mosque in Istanbul and thought "meh, it's okay I guess" (an obnoxious thought, and one I immediately scolded myself for - no one likes a jaded, "I've seen better" traveler). But seriously - the attention to detail, the Islamic influences, the colors!!!

In Armenia I suffered from "church fatigue" - the ennui that comes from sightseeing at too many churches in a short period of time. With at least a dozen mosques on our 12-day itinerary, I worried that I would get "mosque fatigue" in Iran as well, but in fact the opposite was true. As we moved from Yadz to Shiraz to Esfahan the mosques only got more beautiful.

Iranian mosques are not just places of worship, they are works of art - intricate mosaics, rich blues and bright teals, mirrors and glass. They are also architectural masterpieces - gravity-defying domes and arches, towering minarets. No matter your religion (or lack thereof), it's impossible not to marvel at the beauty of these buildings. [An interesting note about mosques in Iran - non-Muslims were welcomed into almost all of them, as long as we were dressed appropriately (and in fact, they were a great place to stop and use the public washrooms). In some countries, only Muslims may enter functioning mosques.]

You might notice a lot of these are called "Friday Mosque" - or Jame Mosque in Persian. Most Iranian cities are built with the most important mosque at the city center, which is where people go to hear a sermon on Fridays, the Muslim holy day.

The mosque in Anar was not on our itinerary - in fact, the whole town of Anar (which means pomegranate in Farsi - my favorite juice!) was not on our itinerary. We were driving from Yazd to Kerman, and the bus pulled over at a rest area outside of town for a bathroom break and a picnic lunch. As we all filed off the bus, a man on a motorcycle pulled up behind us and had a spirited exchange with the guide and bus driver - had we done something wrong? Nope - this nice gentleman was concerned that this rest area was not giving us the best impression of his town. He wanted show us a nicer place to have our picnic.

The bus followed his motorcycle into town and he led us to the mosque, where we found a shady nook in the courtyard and laid out a delicious meal of fresh tomatoes and cucumbers, crumbly feta, olives, bread, cherry juice and tea. After we finished, the man returned and took us for a tour inside the mosque, which was covered in mirrors! A beautiful surprise stop, thanks to a kind stranger. 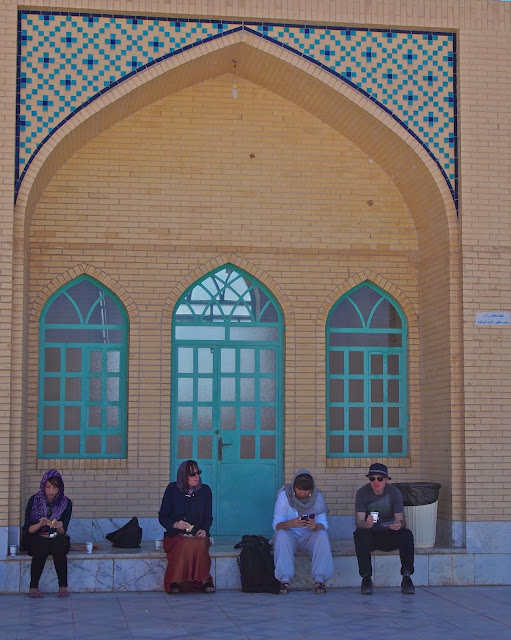 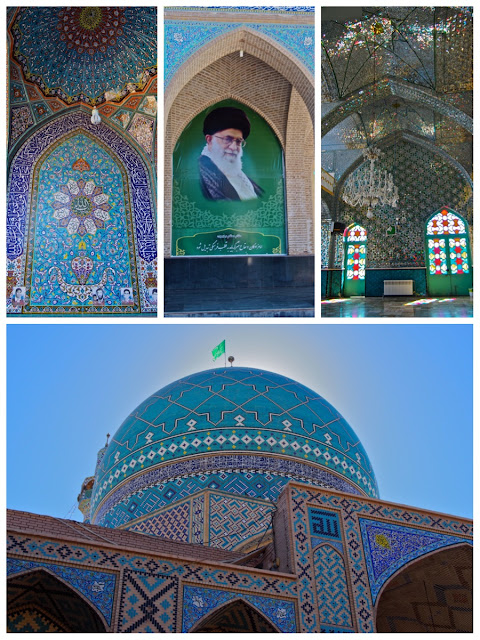 This mosque is unusual in Iran because of the prolific use of pink in the tiles. It's also famous for the beautiful stained glass windows, which create bright, colorful patterns on the tile floors in the morning when the light streams through them (unfortunately, we were there in the afternoon, but they were still really pretty! Here's what it looks like in the morning.) 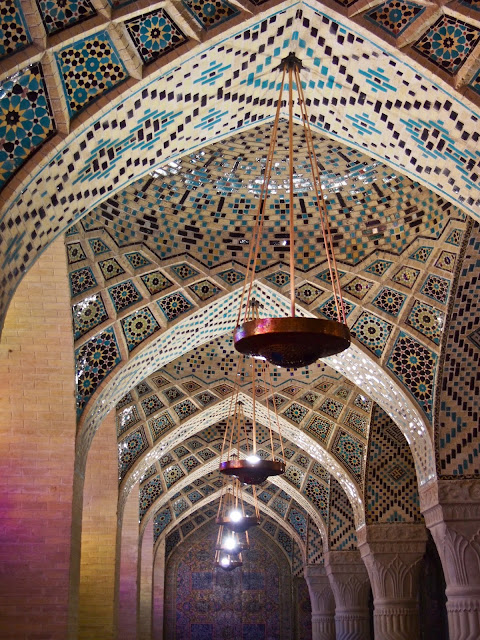 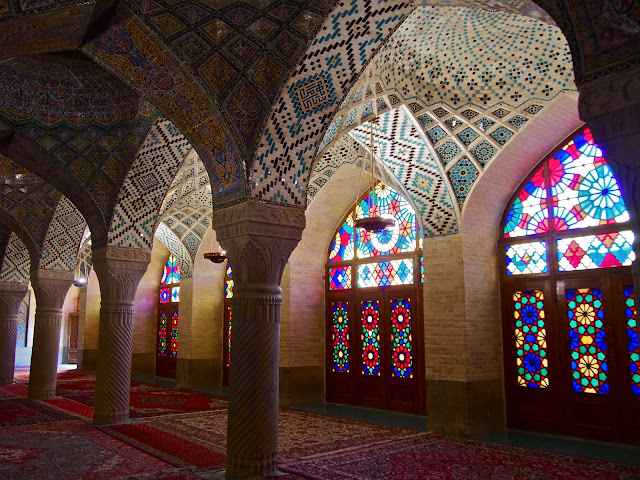 This was one of my favorite mosques, because of the simplicity yet intricacy of its interiors. Nothing but bricks and mortar - but every small dome has a different design. And the shafts of light coming through the holes in the dome had me enchanted. 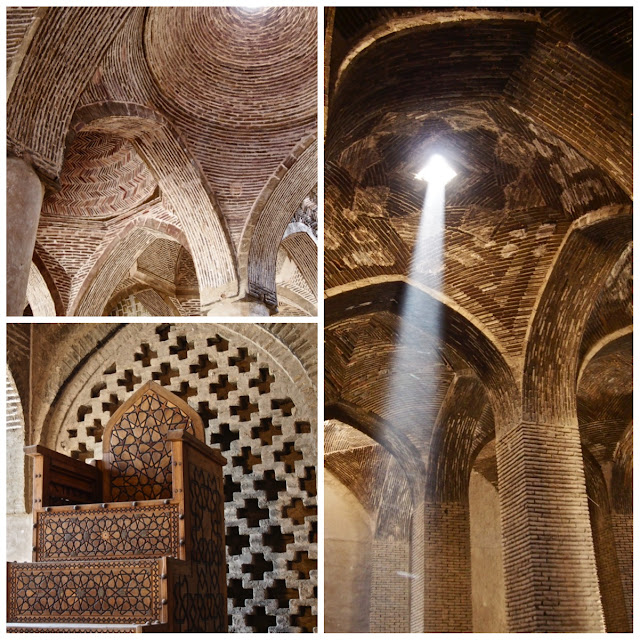 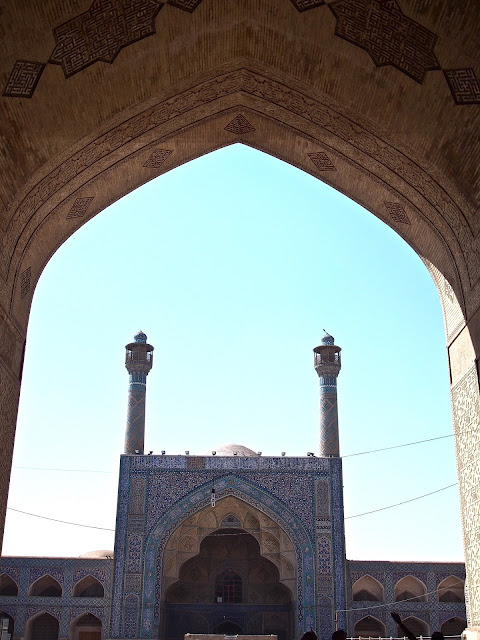 Of course you've heard of the famous Persian carpets, but do you know why they're famous? I had zero idea. Apparently it's all about the type of knot (single knot), the materials (silk, wool, cotton or a blend), and the types of designs used. The Carpet Museum in Tehran was a fascinating intro to the world of Persian carpets, but even more interesting was how ubiquitous they were in daily life - they cover the tiles of the mosques for prayer, the takhts (wooden platforms) for drinking tea and smoking nargile, and even the aisles of the buses. Whether it's a $30 machine-made wool carpet or a 120-year old, $40,000 handmade silk carpet, they are inextricably interwoven into the identity of Iran (like what I did there?? ;-)) 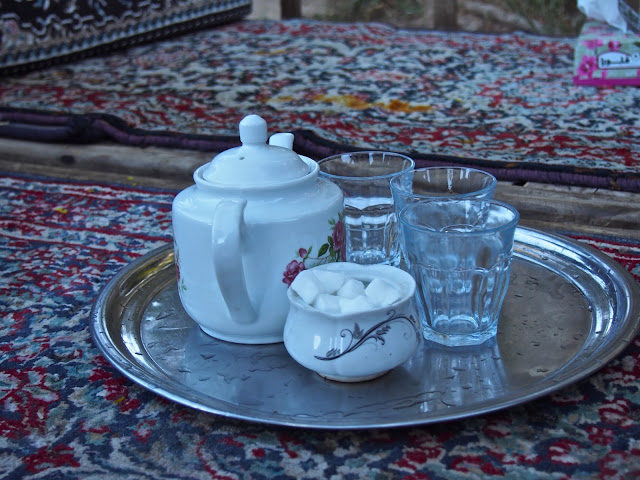 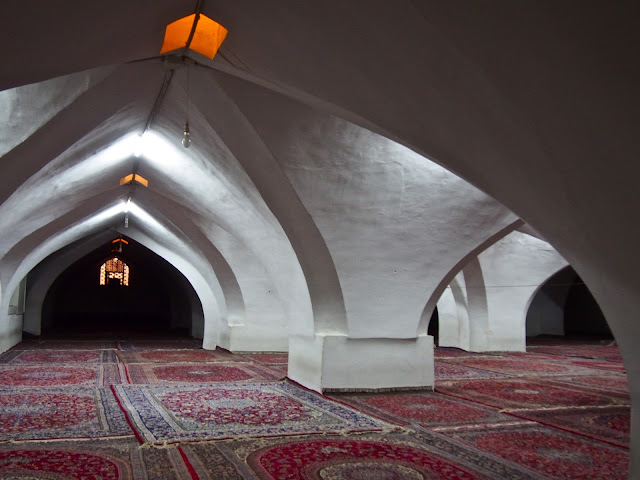 We spent nearly an entire day just in this square. Built in the early 1600's, it is home to the New Friday Mosque, the Sheik Lotfallah Mosque, Ali Qapa palace - and all of those archways between the mosques and palaces house the city's bazaar. The lawn is also the perfect place for people watching - groups of old men laughing, amateur artists drawing sketches, and friends meeting up for a cup of tea and some sunshine. 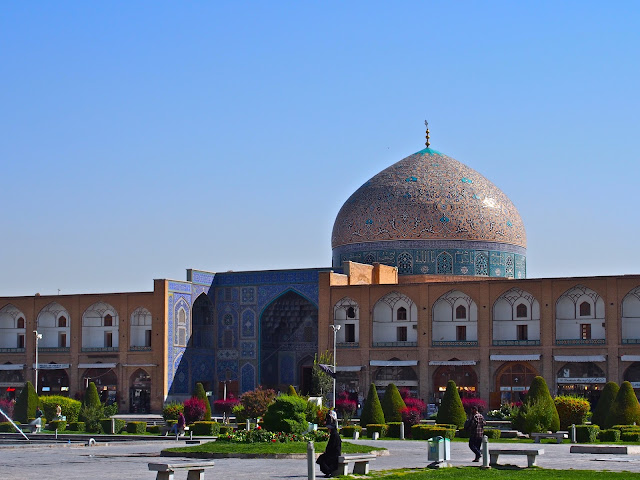 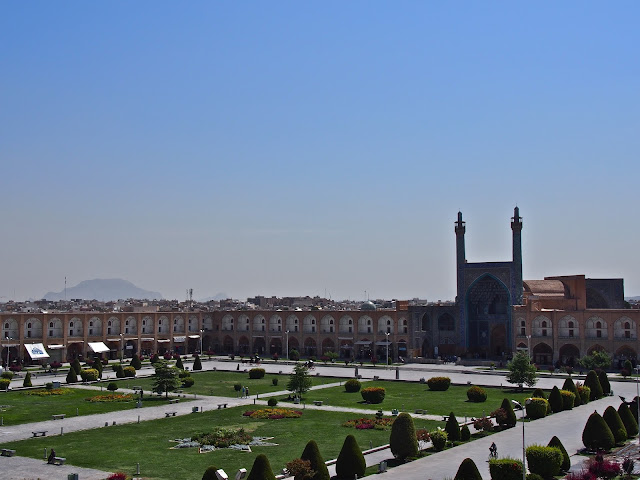 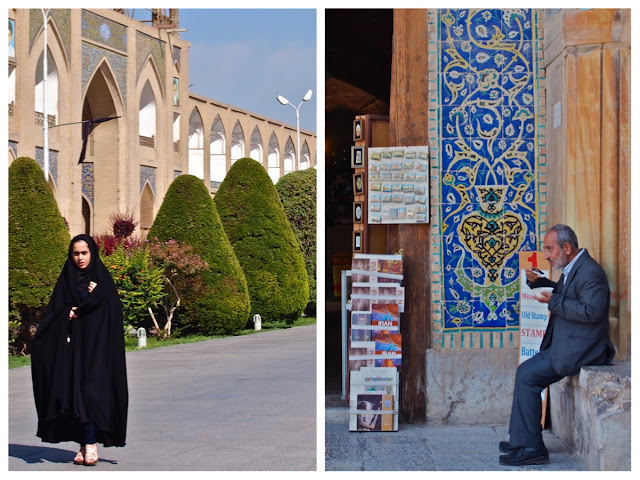 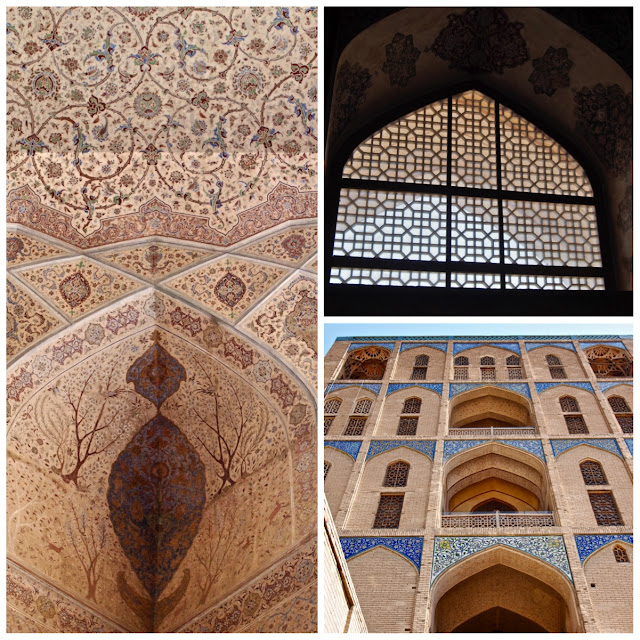 The Bridges of Esfahan 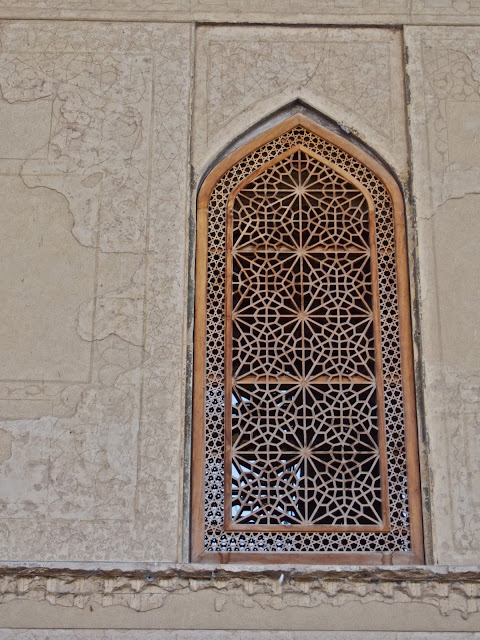 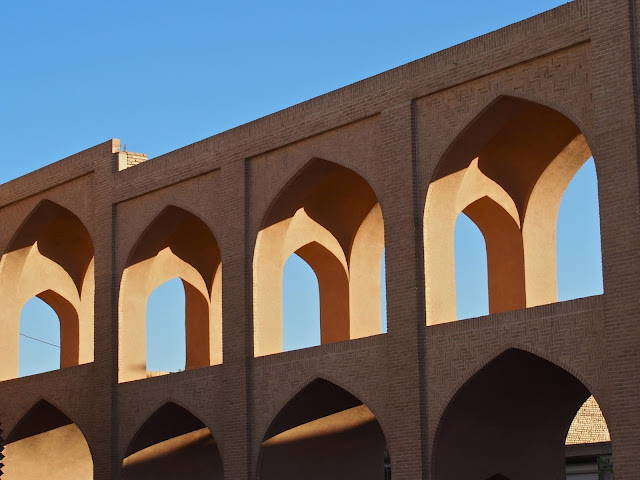 What's your favorite? Have I convinced you to book a trip to Iran yet? ;-)
Labels: Iran